(Note: This is originally from my Tumblr, but I felt like it was a conversation worth having here, for ease of searching and such.)

stopdropandbeauty asked: "Hi! Me again with another complicated writing question. Um, I've been trying to figure out the whole self publishing thing, but it's been hard for me to find accurate information. It's all really polarized, either 'everyone and their dog should self publish, there are no down sides' or 'if you self publish you're an idiot and your mother smells of elderberries.' So I was wondering if you had any thoughts about it/knew any good online resources. Please and thank you!"

I am going to start this answer by noting that I have not “self published" anything in the sense of “I took a thing and I formatted the thing and then I sold the thing and made money for it." All of my for-profit fiction has been traditionally published, meaning that it was presented to someone else in manuscript form, and then they did all the heavy lifting of bringing it to market. My free fiction has technically been self published, since I was the only motive force behind it, but as I haven’t seen a dime from that, I don’t consider it a self publishing success. I hope that makes sense and is clear and doesn’t make me sound like a magical self pub fairy here to wave a wand and clear everything up. Cool? Cool.

So here is the terrible secret of self publishing: no one knows why it works. There is no magical combination of ingredients that makes you an automatic success, no sorcery that makes people sit up and take notice. There are elements that will help you a great deal—good writing is one of them, but good, professional-looking cover design is another, since that’s what catches eyes and brings people to your story. A solid web presence. A good sense of appropriate self promotion. And luck. Oceans of luck, galaxies of luck. Why did someone else hit big while you languish in obscurity? NO ONE KNOWS, and anyone who tells you that they know the cheat codes is probably lying.

I do feel that long term success in publishing of any kind will be dependent on the quality of your writing, which is why I tend to recommend trying traditional publication first, even if you ultimately decide it’s not for you. Why? Because when the rejections go from form letters to “this is good, keep trying" to “not this time, please submit again" to “YES YES WHERE HAVE YOU BEEN ALL MY LIFE," that means you’re in a good place with your craft. You know the words are really genuinely good, not “my mother says I’m a genius" good. I’m honestly grateful self pub wasn’t an option when I first started trying to sell a novel, because the books I wound up writing in my quest to become good enough were better than anything I would have thrown to the wolves of the world if I’d been given the opportunity. I got better by throwing myself against the wall.

Now maybe that’s not for you. Maybe you’re already mad awesome because you had walls to throw yourself against. That’s totally cool, and I support you—and honestly, some stories still have to be self pub, because they’re niche or they’re experimental or because people just don’t take enough risks. But you need to be sure you’re ready, emotionally and skill-wise, because a lot of self pub ends in “failure" when no one sees your book, or it doesn’t make a million dollars overnight.

That’s another thing: “I made a million dollars with my self published novel" is like “I lost a hundred pounds eating McDonalds every day" or “I fell off a thirty story building and didn’t even break a bone." It happens, but it’s a statistical anomaly. Most people will fall inside the bell curve, not on the hard, improbable edge. Don’t pin your hopes on a one-in-a-million chance. You might get what you wish for. You’re way more likely to break your own heart.

Invest in a good book cover. Invest in a good website. Understand that you will be spending money to make money, at least at first, and that there’s a good chance you’ll never make that money back. That’s part of the value of a publisher: they take that risk for you. They also take a good portion of the profit you may eventually make, which is a reason to self publish—if you make any money at all, it’s yours. Just consider what that money is going to cost to make.

Keep writing. You have the potential to be amazing. All you have to do is work as hard as you can, and learn to be a phoenix: learn to be reborn even as you die inside.

You can do it.

So I know you've all been waiting anxiously to see the cover of Velveteen vs. The Multiverse, and I am delighted to finally be able to oblige you. But! Nothing beautiful comes without a cost, and so I must regretfully inform you all that, due to production issues, Velveteen vs. The Multiverse has been delayed slightly, and will not be available at Musecon. Believe me, no one is more disappointed than I am.

Pre-orders are available now, and you can find the information here:

You may notice that the cover price has increased, from $25 for the first volume to $30. Well, that's because this volume is literally twice as long, and thus cost more to print. You are getting so much extra bang for your buck, I can't even begin to express my joy.

And now, behold the pretty: 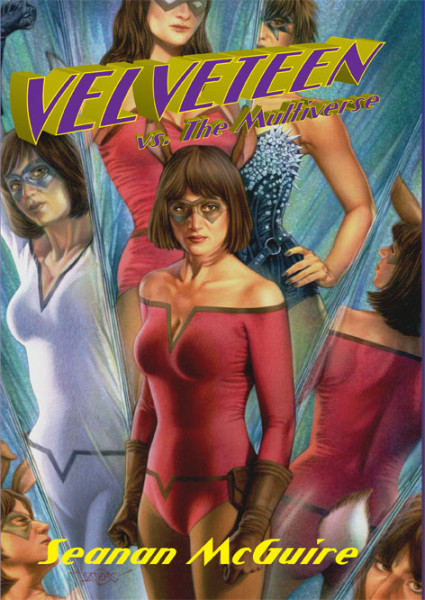 OH MY GOD YOU GUYS OH MY GOD IT'S THE COVER TO VELVETEEN VS. THE MULTIVERSE AND IT'S GORGEOUS!

All the versions of Velveteen are there, Marionette and Roadkill and everybody! I could not be happier.

What do you think?
Collapse